For this exercise you are going to make a montage or collage with a political message. Collect images from newspapers, magazines, your own photographs or images online.  Create new meanings out of these extant images by juxtaposing and contrasting them. Be imaginative, playful, provocative or humourous. In your learning log reflect on the original meaning of the images and your subsequent collage. Write a short evaluative statement.

I started this exercise, first by considering political issues that interested me and that I thought would be good subjects for a photomontage.

I decided to explore the issue of victim blaming for my montage. ‘Victim blaming’ is where the victim of a crime or an assault is considered to be partially or wholly responsible for what has happened to them. It is a term very commonly directed at women who have been assaulted or raped – typically the woman’s behaviour, what she was wearing or the fact that she might have been drinking, are regarded as contributing factor towards the assault.  It is a subject I am quite interested in and which has been raised in the media quite a lot recently.

I began by reading around the subject and assessing my thoughts and feelings on the topic. I created a mind map to document my general thoughts and added in some images to help me start thinking in terms of a photomontage. 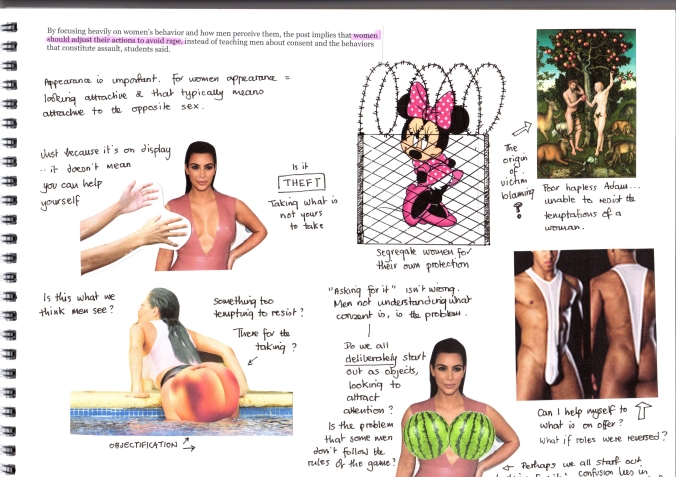 Before I started this analysis, I thought I was very clear about what ‘victim blaming’ was but I found this mind mapping exercise very useful in revealing that my understanding of victim blaming was quite mixed up with other closely related issues such as objectification of women, male entitlement and the question of what constitutes consent. I spent quite a lot of time really picking apart my thoughts here, which proved extremely valuable in helping me to get a very clear idea of what ‘victim blaming’ actually was. Having a really clear understanding of the issue, helped me to devise a clear message about this issue for my montage.

Once I had a clarified in my own mind,  what ‘victim blaming’ was, I created another mind map, analysing this specific issue in greater detail – what it is, who does it, why people do it etc.

My next step was to decide on the statement I wanted my photomontage to make. My more detailed analysis of the victim blaming issue resulted in a number of possibilities:

I decided to use the last idea as the basis for the message of my photomontage.  I wanted to highlight how incongruous it was to accuse the victim for being responsible for the crime against them.

Next I needed a way to illustrate this message in my montage. I began with an idea of showing innocent women enjoying themselves and having fun, with accusers and victim-blamers in the background or in the shadows ‘pointing the finger’ of blame at them. My idea was to show how precarious a woman’s situation was and how easily they could flip from becoming a victim of an assault to becoming the accused.

I then tried another idea, instead of the innocent young women, I wanted to show a victim of crime that you would not think to blame for what happened to them. I chose an image of an elderly woman who had been assaulted in her home, now with the accusers pointing the finger of blame at her. I felt that this image had more emotional impact and better highlighted how wrong it is to blame a victim for their assault.

I reviewed the ideas for the montage with my husband. He agreed that the concept of victim-blaming the elderly woman had the clearest and most impactful message.

The final photomontage is below:

Reflection on the Photomontage

The photomontage shows an 88 year old woman who was brutally assualted as she slept in her bed, by a man who had broken into her home. The image is heart-breaking as the woman looks so vulnerable, frail and broken. Society would not dream of blaming her for being attacked, and would not think to ask her what she might have been wearing at the time of the assault or whether, whether she had been drinking or if she might have somehow encouraged her attacker. However younger woman are often subjected to this sort of ‘victim-blaming’ if unfortunate enough to have been assaulted.

The figures in the background of the image represent the victim-blamers of society and  are people who have recently been in the news, accused of victim blaming, these are Judge Lindsay Kushner QC who stated that women who got drunk where making themselves a target for rapists, Henriette Reker – the mayor of Cologne who suggested that young women should adopt a ‘code of conduct’ to prevent assault, and Richards Littlejohn and Sarah Vine who are columnists for the Daily Mail.

The words in the montage are cut out from a copy of the Daily Mail – a newspaper regularly accused of sexism and victim-blaming.  They are put together in the style of an anonymous ransom note to give a threatening and accusatory feel.

The predominant colour of the image is red for it’s ominous, threatening and dangerous connotations. In addition, red, black and white are colours associated with tabloid newspapers which are often guilty of victim blaming.

Thoughts on this Exercise

I was quite pleased with the way my montage had turned out as I thought that the statement I was making was clear and impactful. I found the process of analysing my thoughts on the issue, very interesting, as I realised I wasn’t quite as clear on what victim-blaming was, as I thought I was and it took me quite a long time and quite a lot of reading around the subject, to get my ideas clear in my head.

My only disappointment with my final photomontage was that the design didn’t feel very original. I feel like I have seen this kind of photomontage design many times before.

I think I need to devote a bit less time to the ‘what’ I am doing, and try focus more, and be a bit more experimental, with the ‘how’.

My tutor made the following comments on this exercise:

“Your final image is really strong, persuasive and conveys the message you intended.
It is also hard to swallow, troubling and I feel very protective of the subject. It makes
me feel quite uncomfortable to corral the subject who has suffered to be put under
further scrutiny even in this imaginary context; like it’s a double blow for her? I
daresay there would be ethical implications for depicting any symbol of innocence
though and of course this is entirely the point. You have given me a lot to think about
here. My only suggestion would be where you could explore further the possible
options for the visuals being more sensitive to the subject with the words-only being
the juxtaposition. Could this work so that your imagery feels very pro-victim but the
words jarr? It will be great to unpick this a bit more during our call.”

In response to tutor feedback on this assignment, I reworked the photomontage to try a version without the images of the accusers.  I kept the red background as a liked the impact and violence of the large expanse of red but I did think the removal of the accusers gave a better overall effect. A viewer of the original poster may not recognise who the accusers are and therefore may not understand why these people are included in the montage. Leaving just the pointing fingers and the newspaper words removes this potential ambiguity and leaves no doubt that the image is suggesting that a vulnerable elderly woman is being accused.  In a sense, knowing who she is being accused by is not really so relevant. 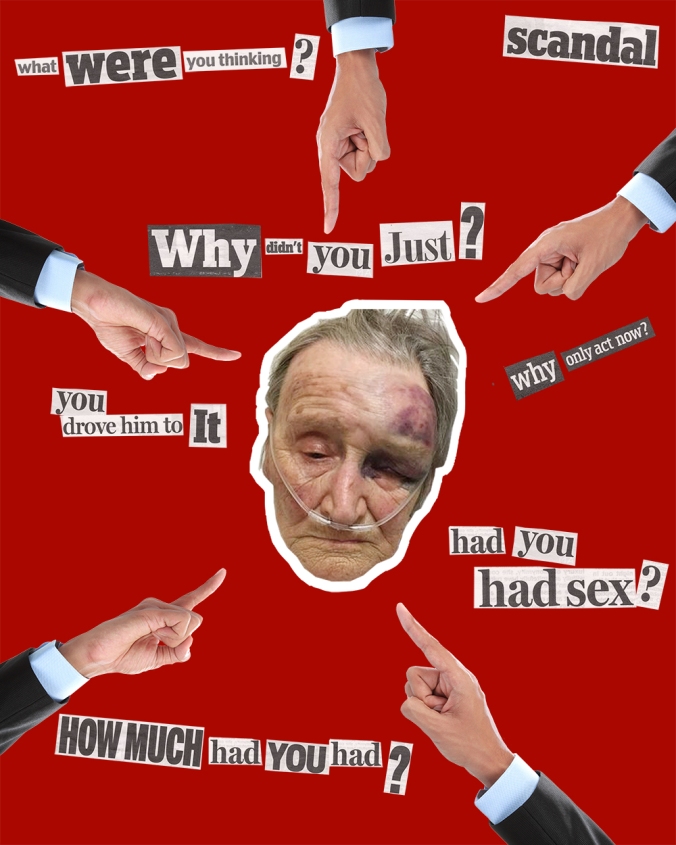 Photomontage was borne out of the Dada movement in Berlin in 1916. Dada was started in Zurich Switzerland where a small group of artists and activists had gathered during the first world war. They used their creativity to to protest against the war, using irony, satire and improvisation to shock the public into recognising the contradictions of ‘civilised’ and ‘rational’ Europeans slaughtering each other in war. Dada art typically shows contempt for the established order and is often called ‘anti-art’.

Berlin dadaists were more politically orientated and had revolutionary social change in Germany as one of their main goals. John Heartfield (originally called Helmut Herzfelde) created one of the first photomontages for the cover of catalog for the ‘First International Dada Fair’. Photomontage was subsequently used a lot by Dada artists.

Photomontage was also used a lot by Russian Constructivists. The Russian Tsar was forced to abdicate in 1917 due to failures during the first world war. The Bolsheviks, led by Lenin, took control in late 1917. Russian civil war followed from 1918 – 1920, between the Red Army (the Bolsheviks) and allied governments supported Whites. The Whites ultimately failed and the Bolsheviks established a communist state (maintained through the suppression of dissent by violence and intimidation).

The Bolsheviks used propoganda posters to ‘sell’ communism to the people. New artistic styles were required for the new utopian society. Constructivism built on the previous abstract style of Suprematism. (Suprematism was devised around 1915 by Kasimir Malevich and used blocks of colour a ‘non-objective’ style of baring no representational relationship to the natural world. The term suprematism relates to “supremacy of pure feeling in creative art”).

Constructavists such as Varvara Stepanova and Alexander Rodchenko produced propaganda posters, designs for workers clothes and designs for government buildings.

In Russia, photography was revered because of its ability to produce depersonalized images which married well with communist collective ideals. Photomontage was therefore a natural tool for the Constructavist artists.

One of the Berlin Dadaists but best known for his later political art photomontages created from 1930 to 1938 exposing facism and the Third Reich.

Hannah Hoch was another Berlin Dadaists who used Photomontage. Höch explored the concepts of gender and the ‘New Woman’ in Germany society, presenting complex discussions around gender and identity.

A Russian Constructivist of the 1920s who used photomontage. 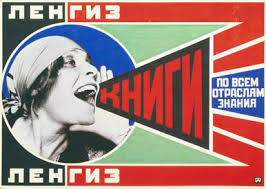 An advertisement for the Lengiz Publishing House sometimes titled “Books”, which features a young woman with a cupped hand shouting “книги по всем отраслям знания” (Books in all branches of knowledge), printed in modernist typography.

On the lower left of her poster, under the phrase “through red glasses” (i.e. the world as seen by Bolsheviks), she drew three figures dressed in her prozodezhda (workers) costumes. The gender of the central, female figure is discernible only by the rounded line of her jaw and the slight fullness of her short hair. Their four anti-revolutionary white counterparts appear on the right side, dressed in upper-class clothes. Here the lone woman is strongly differentiated from the men, with round breasts, a tiny waist and wide hips. The female icon of those who see through red glasses is a productive worker no longer confined by conventional signs of femininity.

Later photomontage was adopted by surrealists who brought together disparate images to reflect the workings of the subconcious mind.

“In these pictures I unite four generations of the female line of my family, who represent a female chain. I began with my daughter and ended with her great-grandmother. As a contrast to the patriarchal system of inheritance, I wanted to show the matrilineal connection and the interaction between the generations: the young girl already has the old body, and the old woman still has the young body inside her. The aim is to ensure that this painful process remains visible.”